Tabitha Worsley will fly the flag for her whole family when she tackles the Randox Grand National aboard their much-loved Sub Lieutenant.

The 12-year-old is owned and trained by Worsley’s mother, Georgie Howell, and was purchased last September with the veteran chase series in mind.

A minor injury ruled him out of that competition, but two credible runs in three-mile Listed chases at Ascot swayed the family in the direction of the biggest staying event of them all.

“The race at Ascot looked like a nice starting point, and he ran well there,” said Worsley. “After that we thought ‘the National looks a very good race for him.’

“When you’ve got a horse that could go, it could be the only chance we ever get to do that. The more we talked about it, the more we thought that – and it became the plan.”

The gelding will provide both mother and daughter with their first experience of the race itself, but Worsley is already familiar with the famous Aintree course – having won the Foxhunters’ on Top Wood at the 2019 meeting.

Worsley considers the two horses to share several traits and is hoping luck will be on her side again when she bids to maintain her unbeaten record over the track.

“They’ve got a lot of similarities in that they just get into a nice rhythm and just travel and jump,” she said. “They’re very clever at their fences and just really honest gallopers.

“I’ll line up with a bit of space somewhere and try to find a little pocket, get into a rhythm and ride the race as it comes.

“With 40 horses you need a lot of luck in running, but if I can just find a pocket and have a nice little run round like I did on Top Wood, it’d be spot on.”

Sub Lieutenant was formerly campaigned in the silks of Gigginstown House Stud and trained by Henry de Bromhead, winning eight races and finishing second in both the Ryanair Chase and the Melling Chase in 2017, and then the Topham Chase over the National fences in 2019.

He is therefore well acquainted with the challenge ahead, and Worsley reports him to be as eager as ever as he verges on his teenage years.

“He’s been around for a long time, but he certainly doesn’t lack the enthusiasm,” she said. “If you sit on him at home, you don’t think he’s a 12-year-old – he’s fairly wild at the minute!

“He went to Lambourn to have a school and a good bit of work, and my mum said she was having kittens when she put him out afterwards because he was just doing handstands, so he’s obviously taken it well!”

“He’s probably at the age now where he appreciates an easier way of life, where he does something different every day. He doesn’t spend that much time on the gallops – he likes to canter on the fields around the farm, and we keep him really sweet and happy.”

Worsley’s mother trains a string of just six horses in Tenbury Wells, with all of the family involved in the yard and the whole team planning to travel to Aintree for the race.

“It’s a real family affair – my brother and sister-in-law will be leading him up together, and I ride him most days,” she said. “We are a proper little family team, and just to have that support – all of us going there together – it’s amazing.

“I generally stay quite relaxed. It’ll be more excitement than anything else, but my mum on the other hand … I don’t think she’ll sleep for the next few days.

“She’s terrified but very excited as well. I don’t think we’ll fully believe it until we get there.”

Sub Lieutenant is likely to line up as an outsider, but his jockey knows the Grand National can throw up a surprise and cites long-odds winners such as Mon Mome and Aurora’s Encore as one reason the race has become such a spectacle.

“It’s one of those races, how often do you see a favourite win?” she said. “You’ve got to have luck in running. Mon Mome bolted up – and I think that also adds to the public appeal, in that anyone could win it.

“Even if you’re a rank outsider, if you get the right run through the race and a bit of luck, anyone can win.

“It’s not necessarily the classiest or even the best horse that wins it – it’s the one who copes with the conditions the best and has the best run round.”

Although both horse and rider are proven at Aintree, Worsley is still thrilled by the mere thought of lining up there for a race she has always revered.

“Anyone would dream of winning the National. It’s an amazing race, and I daren’t even think about winning it,” she said. “Just to be there in the 40 horses, with the real top guns and the best of the best, it’s amazing – it’s what we’ve dreamed of.

“It’s just so unique, four miles and two (furlongs), those big daunting fences, it’s the people’s race and it’s one of the biggest races in the world. It’s a unique spectacle.”

A victory, or even a placed run, would financially justify the £50,000 sum the family spent to buy the horse, but Worsley is adamant he has already repaid them.

“He already is worth every penny,” she said. “He’s given us two brilliant days at Ascot, finishing fourth in two Listed races.

“That’s why we bought him. We wanted something we could run that would win on a Saturday – and if he could win (the National), it’d just be unbelievable.

“He’s been the horse of a lifetime. He’s already repaid us by giving us two really fun days out, and hopefully there’ll be more to come.

“Whatever happens, he’ll never leave us.” 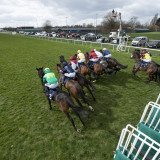