The QIPCO Guineas Festival: Five key runners for this weekend

Andy Stephens looks ahead to the first Classics of the year and suggests a handful of horses to keep an eye on in the supporting races.

The first Classics of the year at Newmarket are almost upon us and they offer no shortage of intrigue.

Never mind who is going to win the QIPCO 2000 Guineas on Saturday, who is going to go off favourite? There’s never been a market leader sent off at more than 4-1 for the race this century but that has to be a possibility this weekend.

Sunday’s QIPCO 1000 Guineas is a different story, with Santa Barbara a general 6-4, having been available at 33-1 after she won a backend maiden in the mud over a mile at the Curragh at the end of last season.

Good luck if you are at on a juicy price but, if you are not, then do your best to resist jumping on the bandwagon. She created a good impression on her debut but lack of experience has to be a worry and, in terms of form, just about every other potential runner in the race on Sunday has achieved more.

Aidan O’Brien has issued several glowing bulletins and Santa Barbara slips into the “could be anything” category but her pedigree, coupled with fact she stayed a testing mile so well on her sole start at two, also suggests we might not see the best of her until she tackles middle distances. For what it is worth, her half-sister, Iridressa, was not quick enough to win the Guineas a couple of years ago.

The absence of Fillies' Mile winner Pretty Gorgeous will obviously make her task easier - Joseph O'Brien announced on Friday she would not be running because of a dirty scope - but Mother Earth, a stablemate of Santa Barbara, Statement, and Thunder Beauty are on my radar.

The Guineas Festival is far from being about just the two Classics, with the support races invariably yielding quality acts. Last year, for instance, Mishriff was among the winners.

Below are five runners to keep a close eye on. Racing TV is the only channel where you can watch every race at the two-day meeting.

CAME FROM THE DARK

The official ratings suggest there are five superior horses to Came From The Dark in the Group Three sprint but the five-year-old looks a speedster on the up and he’s not one to underestimate.

Gelded and given a wind op since last season, the striking grey was an eye-catcher on his return and confirmed the promise of that run at Newbury 13 days later when getting the better of Garrus and King’s Lynn in a tight finish.

He tanked through that handicap (off a mark of 99) and the manner in which he collared two decent rivals, who had got a headstart on him, was taking. The winning margin was small but Came From The Dark strikes as a bit of a “thinker” and is never going to be one by wide margins.

He meets Garrus on 4lb worse terms but I fancy he can confirm the form with Hollie Doyle, aboard for both his races this term, again in the saddle. Front-runners Glamorous Anna and Emaraaty Ana are drawn nearby, so the combination should get a lovely tow into things.

One niggle would be very quick ground as Came From The Dark missed a race a couple of years on account of fast going at York, but no doubt Ed walker will assess conditions beforehand.

Pyledriver’s only blips last year were when he almost got bowled over in the Derby, and when he failed to cope with deep ground in the Champion Stakes at Ascot in October.

Put a line through those runs and he stands out here. Certainly, he is going to take some stopping if he can reproduce anything like the form he showed when winning either the King Edward VII Stakes or Great Voltigeur Stakes in decisive style last summer.

A mile and a half seems to be optimum, although he also ran well when beaten just over a length into third in the St Leger.

Sir Ron Priestley, runner-up in the 2019 St Leger, was having his first race since when winning at Nottingham this month but the drop back in trip is unlikely to help him and he has the “bounce” to overcome.

There was no mistaking the twinkle in William Haggas’s eye when Lydia Hislop asked him about Mohaafeth’s prospects before the colt’s reappearance run off a mark of 85 in a handicap at Newmarket this month.

The Derby entry duly won with great authority, despite idling, and Haggas estimated afterwards that he would “go up north of 7lb” as he pondered future plans, that included talk ranging between another handicap, the Dante and down the line possibly a tilt at the premier Classic at Epsom.

As it transpired, the official assessor settled on a 7lb rise and there’s little doubt Mohaafeth remains well-handicapped. But his owners, Shadwell Estate, are all about the big league and you can understand the desire to try and make him a stallion as he’s by Frankel out of a Sea The Stars mare.

This Listed race looks something of a compromise, in terms of race choice, but should help his in-form connections find out exactly what they have on their hands, as Secret Protector, one of three rivals for him and quoted at 4-6, is rated a stone or more superior.

Since April 15, Charlie Appleby has run 17 three-year-olds. Nine have won, including in Group and Listed company, and four more have finished second. All bar three of the losers has been beaten a length or less, with one of those losing his action.

Those stats tell their own story and augur well for A’Shaari, who impressed when winning in fluent style on her debut over 7f at Newmarket in late August from Ready To Venture, who won next time out and was a fair third at Ascot on Wednesday.

The daughter of Dubawi is a sister of the stable’s formerly high-class Wuheida, whose exploits included two Group One wins at up to 9f and a close fourth in the Prix de l’Opera over a mile and a quarter.

Appleby clearly views her as more a middle-distance filly as he instantly starts her over ten furlongs, and has her engaged in the Cazoo Oaks at Epsom and Irish equivalent. She’s also in the Tattersalls Irish 1000 Guineas but that looks more Plan B at this stage.

Incidentally, Appleby also runs another three-year-old, Creative Force, in the opening sprint handicap. He was a taking winner at the Craven meeting and not one to oppose lightly.

Owner Emma Banks (@asecretagent), who has worked with some of music's biggest names, did her best to give Nick an answer! 👇

Emma Banks, the owner of Lady Bowthorpe, has worked with some of the biggest music names in the world, prompting Nick Luck to pursue an interesting line of inquiry when she appeared on Luck On Sunday last year. “Is Lady Bowthorpe, Katy Perry?” he asked.

Banks pondered before suggesting that she was in fact more “Florence”, as in Florence and the Machine because she can apparently be quite sensitive on occasions.

I’m hoping she will be more Tina “Simply The Best” Turner this weekend, as she gets a chance to race beyond a mile for the first time. Many of her race comments up to now include phrases such as “keeping on” , “stayed on” or the dreaded “never nearer” and the extra furlong on Sunday may unlock a bit more improvement.

Even as it stands, her efforts in the second half of last summer when partnered by Kieren Shoemark, including an emphatic Group Three win at Ascot, make her the one to beat. She’s proven at the track, versatile regards ground and, encouragingly, won first time up last term, albeit at a lower level. In addition, William Jarvis’s three runners in the past week, his first since March 10, have finished 112. 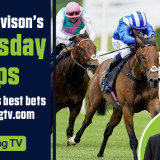 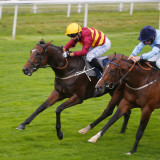