Tony Mullins expects “big improvement” from Princess Zoe when she makes her second start of the season in the Irish Stallion Farms EBF Vintage Tipple Stakes at Gowran Park on Wednesday.

The daughter of Jukebox Jury enjoyed a meteoric rise after being bought from Germany last year, progressing from a mark of 64 when second on her Irish debut at Navan in June to claim top-level honours in the Prix du Cadran on Arc weekend in Paris.

While she came up short in her bid for a sixth successive win in the Prix Royal-Oak, she was far from disgraced in finishing fourth behind the Mark Johnston-trained Subjectivist – and she was well fancied to make a winning return in last month’s Noblesse Stakes at Cork.

Princess Zoe returned in the Noblesse Stakes at Cork, a key formline ahead of the Vintage Tipple Stakes with numerous fillies and mares set to renew rivalry

Princess Zoe was ultimately disappointing in beating just one rival home, but Mullins is confident a combination of improved fitness, softer ground and a step-up in trip will see his stable star in a much better light ahead of a planned tilt at the Gold Cup at Royal Ascot.

“I’m hoping that the ground stays yielding to soft and the extra two furlongs should make a difference,” said the trainer.

“She’s getting fitter all the time. This will be her last run before the Ascot Gold Cup and I’m hoping to see a big improvement from Cork.

“It was a funny-run race at Cork. I thought they went very slow early on, which certainly wouldn’t play to our stamina strengths.

“I’m hoping it will be different (on Wednesday). She’s got to give away weight, but she’s going to have to do that all the time now apart from in Group Ones – we can’t avoid it.”

Mullins admits it would be extra special to land a Listed prize named after Vintage Tipple, who his father Paddy trained to win the Irish Oaks in 2003.

He added: “Gowran is our local track and the race is named after a horse my father trained to win a Classic, so it would be a lovely to win it.” 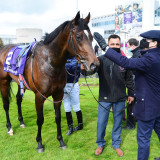