Majestic Colt landed the first Listed prize of the European season as German racing sparked back to life at Hanover on Thursday.

Action had been on hold in the country since March due to the coronavirus pandemic, but under blue skies and glorious sunshine, racing resumed with a 12-race card featuring three Listed heats.

The Grosser Hannoverscher Sprintpreis was the first of that trio of highlights and the six-and-a-half-furlong heat produced a thrilling finish.

Tosen Shauna appeared to have done enough to take the honours, only for the Andreas Wohler-trained Majestic Colt to find an impressive change of gear in the final furlong.

He zipped down the outside in the hands of Bauyrzhan Murzabayev to prevail by a neck in the colours of well-known owner Jaber Abdullah.

Abdullah’s racing manager, Bruce Raymond, said: “I have just sent a video of the race to Jaber and he’s very excited – it’s just exciting to be racing really.

“It’s wonderful to get a win, particularly in a Listed race.

“I think the fact they went quite fast up front suited him as it let him get settled and come from behind.

“All being well, I think Andreas would like to run him in a Group Three at Baden-Baden in about three weeks’ time.

“Six furlongs may be just a bit sharp for him, but he’s an improving horse who has started the season well.”

Jin Jin and Axana enjoyed a similarly close-fought battle in the Listed Grosse Hannoversche Stutenmeile, with the former just prevailing.

Axana, who is also trained by Wohler, was second to Mark Johnston’s Main Edition in last year’s German 1000 Guineas and it briefly looked as though she had edged into the lead over Jin Jin in the final furlong.

However, Jin Jin found a little extra to push back in front for jockey Maxim Pecheur and trainer Bohumil Nedorostek.

More No Never earlier had the honour of winning the first race of the resumption when scooting clear in the Neue Bult Maiden Sprint-Cup for trainer Markus Klug and jockey Michael Cadeddu.

The meeting was staged behind closed doors, as will be the case for all fixtures in the immediate future, with participants required to adhere to strict hygiene policies and social distancing. 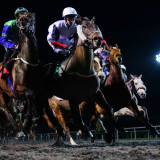