Betting expert Dave Nevison has three selections at Wincanton plus another at Haydock park. Watch how the quartert fare on Racing TV.

Has gone up 10lb for his recent success but in my view it was thoroughly earned and that in a race that may not be the most competitive he can complete the hat trick.

It is important to me that he has jumped around this track successfully as it represents quite a test for a novice chaser with its run of fences in the home straight.

His jumping has improved with each of his four runs over the larger obstacles and he is now ready to take on handicappers.

A mark of 131 definitely does not look beyond him. Soft ground is essential for him to show his best so conditions will suit him well.

He exploited a mark of 83 on his latest start over fences, having previously won a hurdle off a mark 10lb higher in pretty convincing style.

He won his chase narrowly but would have been much more impressive but for a bad mistake at the last.

The handicapper has raised him 9lb but that still looks lenient.

Apart from that late error he jumped around this track very well and I will be surprised if First Man does not follow up, especially as his jockey is able to claim his 5lb allowance.

Has never run in a handicap hurdle but I believe he’s potentially well-treated and could run well at a price here.

I have been with him over fences hoping he would make up into a useful staying novice chaser and was particularly disappointed last time out at Newbury.

He appeared to be going well for most of the race, jumping a little better than he had previously, but then his run faltered badly in the straight.

It transpired he had lost two shoes and injured himself, which I am assuming explains his disappointing finish.

He has shown himself to be a strong staying hurdler on his best runs over hurdles and was pitched in against the best around on occasions so this represents a step down in grade.

I believe Haydock could be a track he might excel at given he likes to be rolling along up with the pace. Heavy ground will not be a problem and if he appreciates the return to hurdling he could surprise.

Unsurprisingly improved when stepped up to the longest distance he has raced over last time out and he can confirm placing with third-placed horse Take Your Time on 5lb worse terms.

The six-year-old had not proved quick enough to win a bumper last season but after two good runs in novices, over too short a trip, he battled well in his first handicap and might have gone close but for a mistake at the last. I fancy he won’t have to improve to win this. 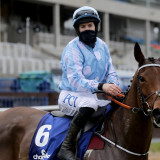