Dave Nevison's top tips for Tuesday: Boasty looks something to shout about

Dave Nevison has set his sights on a happy hour at Kempton on Tuesday evening. You can watch how they are live on Racing TV.

King Ottaker was a luckless sixth in the Balmoral

I was disappointed with King Ottaker’s run in the Balmoral Handicap at Ascot on Saturday, though grateful for the sixth place on offer for my each-way punt.

He did turn out to be drawn on the wrong side and his jockey endured a torrid time trying to smuggle him into the race. My immediate thoughts were for next year’s Lincoln and I am glad my colleague Martin Dixon, who I do not think was financially biased, expressed a similar view.

It will not be compensation to Charlie Fellowes, the trainer of King Ottaker, if he manages to win this 0-65 with Boasty but it will definitely help me and I think he looks just about the only horse in the race who has significant improvement in him.

He has been dropped 3lb for a reappearance run when he fluffed the start and was never in the race. However, he was going on well at the line without being overly exerted.

That run adds another to a succession of races where he has found trouble or caught the eye, looking like a horse to be with at some point. I am hoping he has improved for the recent run and might show his real potential on Tuesday.

It has to be significant that Oisin Murphy is back on board here after finishing runner-up over 7f last time.

He broke his maiden over 6f here three starts ago and it looks to be his trip. I would be pretty sure the champion jockey would definitely have had some input into dropping him back in distance.

He has bagged a good stall in two and his trainer, Ed Walker, is in excellent form and despite going up in the weights for getting beat Juan Les Pins still looks more progressive than his rivals here.

Is another who is returning to the course and distance where he broke his maiden and may be able to add to his tally here.

His stable have not had a good year but most David Elsworth runners are now going well and Make Haste Slowly definitely ran better than his finishing position suggests over an inadequate trip last time.

Want to be in with a chance of winning a 50-inch television, a Racing TV membership for three years and a Zoom call with the legend that is Ruby Walsh? Click here for more details 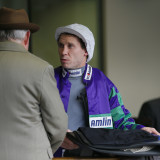