Cheltenham Trials Day: How To Bet £20 ante-post on the Cotswold Chase

The cold and wet has claimed many fixtures this month but the good news is that temperatures are on the rise and that Trials Day at Cheltenham on Saturday promises to be a cracker.

There’s great depth to the Paddy Power-sponsored Cotswold Chase with last year’s one-two, Santini and Bristol De Mai, entered along with Native River, Saint Calvados plus a supporting cast that includes a couple of Festival heroes in The Conditional and Yorkhill.

The obvious place to start is with last year’s renewal, when Santini wore down Bristol De Mai after a great tussle. Muddy conditions at Cheltenham are made for the grinding Santini, who went on to be beaten a neck in the Gold Cup, whereas it seems they are never going to play completely to the strengths of Bristol De Mai, who is 0/6 at the track.

However, Henderson suggested on Tuesday that Santini is no more than 50/50 to run because of the prospect of heavy ground. The going is described as soft, heavy in places as I type and is likely to stay that way with some more rain forecast this week.

Clearly, anyone thinking of backing Santini must now wait until the final declarations on Thursday before parting with their cash. But for those of us who fancy something else in the field, now is the time to have a punt.

Watch a full replay of the King George VI Chase

The one I keep coming back to is Sant Calvados, who is a general 9-2.

Like most folk, my snap reaction after he finished fourth in the King George VI Chase at Kempton on Boxing Day, when having his first run beyond 2m5f, was that he wanted dropping back in distance. He tanked through the race and was a close second jumping three out, only to be run out of the places.

But his connections are clearly not convinced and the more I watch the race, the more I’m inclined to give him the benefit of the doubt because he was far too keen, almost certainly as a consequence of having been off ten months, and actually stuck on pretty well in the closing stages.

Indeed, had the eight-year-old not shifted left and jumped a bit cleaner in the closing stages then he would have been an honourable third. As it was, he still finished a length and a half ahead of the race-fit Santini, who will be 6lb worse off if he does re-oppose.

Saturday’s contest will be even more of a stamina test but Saint Calvados is entitled to have tightened up a bit for the run and, more important, he should be less inclined to pull Gavin Sheehan’s arms out.

There are also several front-runners in the field, which should also help him settle. And, with no penalty, he will also have 10lb less to shoulder than at Kempton.

Testing ground suits him – admittedly it’s a double-edged sword in terms of getting the trip – and we know the track suits him well (better than Kempton, I'd venture to suggest), with his near-miss in the Ryanair Chase at the Festival last year being a personal best.

He might have beaten Min that day with a bit room to maoeuvre from two out and the form has a glow, with A Plus Tard and Frodon the next pair home. He stuck on doggedly, again offering hope that he will stay another half a mile.

With doubts over Santini’s participation, triple Betfair Chase winner Bristol De Mai has taken over at the head of the betting at 2-1. He’s a smashing horse and would be odds-on if the race was run at Haydock, but it isn’t.

My other concern for him on Saturday is that Native River and Yala Enki also like to force the pace, while Mister Malarkey and Yorkhill also made much of the running for their recent wins. The front-runners may just soften each other up and leave the door open for the more speedy Saint Calvados, provided he switches off, to cut them down in the closing stages.

Native River, the 2018 Gold Cup winner, shaped well on his return at Aintree behind Lake View Lad (the cards fell in his favour that day and he is up against it under his penalty) and commands respect, but Team Tizzard are having a challenging season and it has been a month and 41 runners since they last had a winner. The last time they went through a winter month without a success was December 2009, but time is running out for them to put that right in January.

I’m also going to have a small each-way bet on The Conditional, even though he has plenty on his plate to judge by the official ratings.

He is 2-2 at the track and a thorough stayer proven in the mud, plus travels like a horse who might just be better than his mark suggests. I can see Tom Scudamore, who rides him for the first time, smuggling him around and picking up some pieces, or better, late on.

How To Bet £20 ante-post on the Cotswold Chase 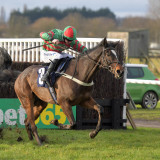